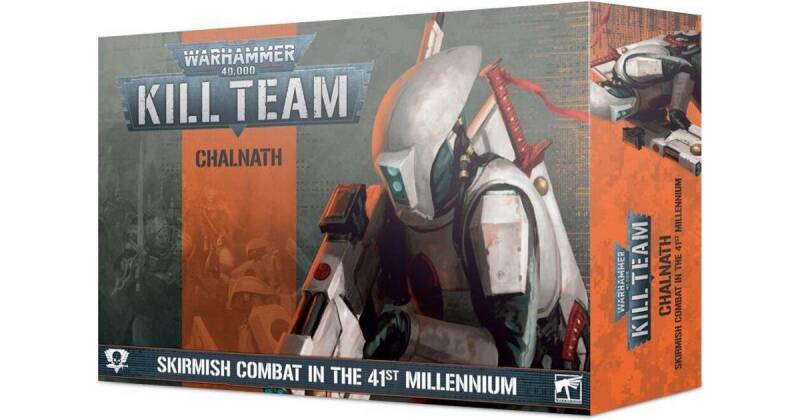 Adherents of the Greater Good, the T'au Empire have expanded into the Vedik System, allying with the local planetary governors. Their efforts begin to unravel when an Adepta Sororitas ship arrives, and the Sisters of Battle attempt to wrest control of the system. Kill Team: Chalnath lets you take part in the guerilla battles fought between kill teams of the T'au Empire and Adepta Sororitas.

The new edition of Warhammer 40,000: Kill Team has been redesigned from the ground up as the greatest tabletop skirmish experience yet, and Kill Team: Chalnath is the perfect expansion. This incredible boxed set includes two full kill teams – trainee Adepta Sororitas Novitiates, who have yet to earn the right to wear power armour, and the high-tech special forces of the T'au Pathfinders – alongside the rules, terrain, and a new gameboard.

1x 96-page Kill Team: Chalnath Rules Manual: Expand your sphere of operation with background for the Vedik System, plus the Adepta Sororitas and T'au Empire forces fighting within. Alongside this narrative, you'll find new rules, datacards, and background tables for both the Adepta Sororitas Novitiate and T'au Pathfinder Kill Teams, as well as a host of additional special rules and missions set in this war zone.

23x Citadel Miniatures: Two full kill teams comprised of an Adepta Sororitas Novitiate Squad and a T'au Pathfinder Squad. Each features a wide array of customisation and assembly options, allowing you to personalise your kill team, and many of the models can be assembled as multiple kinds of operatives. Both of the kill teams also come with a full transfer sheet, giving you a wide range of emblems for customising your models.

1x Double-sided Kill Team: Chalnath Gameboard: Engage in skirmishes on this double-sided cardboard gameboard that represents the blasted terrain of the Vedik System.